ATLANTA (November 4, 2016) — Agent-broker organic revenue growth fell to 3.6% in the third quarter of 2016, the lowest pace of growth in five years, as measured by the latest Reagan Consulting Organic Growth and Profitability (OGP) survey.

“After beginning the year with a slight uptick, organic growth declined in both the second and third quarters and seems poised to drop further in the fourth quarter,” commented Kevin Stipe, president of Reagan Consulting, a management consulting and merger-and-acquisition advisory firm for the insurance distribution system.

Third-quarter profit margins declined to 21.4%, as measured by EBITDA (earnings before interest, taxes, depreciation and amortization). Note that third-quarter margins are higher than year-end margins due to contingent income (received disproportionately early in the year). Reagan projects that full-year 2016 EBITDA margins will fall below 20% for the first time since 2013.

“Weakened organic growth and heavy resource investments have taken their toll” on agency earnings, said Stipe, who noted that 2016 is shaping up to be the second consecutive year of profitability declines after several years of improved margins.

Economic growth and commercial lines pricing have been weak since 2014: U.S. gross domestic product has increased only 1%-3% over the past few years, and p-c rates have declined steadily for nearly two years, Reagan pointed out. 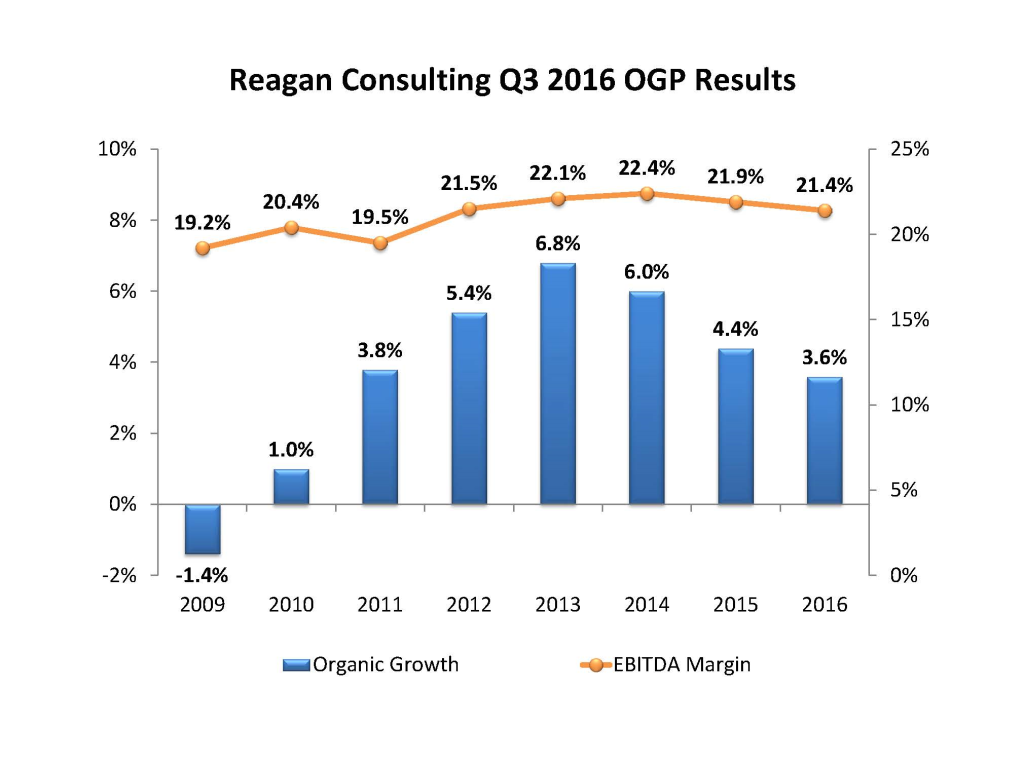 There is a new component to the OGP survey: Reagan Consulting’s “Sales Velocity” metric. Defined as current-year written new business as a percentage of prior-year total commissions and fees, Stipe noted, Sales Velocity is “the best measure of new business” for agents and brokers.

A typical level of Sales Velocity is slightly above 12%, which means approximately $120,000 of new business per $1 million of prior-year commissions and fees. In the OGP survey, top-quartile firms posted nearly 20% Sales Velocity. These same firms generated 10% organic growth for 2016 through the third quarter, showing the clear correlation between Sales Velocity and organic growth.

Reagan Consulting has conducted its quarterly survey of agency growth and profitability since 2008, using confidential submissions from approximately 140 mid-size and large agencies and brokerage firms. Roughly half of the industry’s 100 largest firms regularly participate in the survey. Median revenue of the firms completing the third-quarter survey is approximately $20 million, making the study the industry’s preeminent survey of mid-size and large privately held brokers.