ATLANTA (May 5, 2017) — Agencies and brokerage firms reported that their organic growth fell to 3.9% in the first quarter of 2017, the weakest growth rate since 2011. Despite the slippage, brokers are forecasting 5% organic growth for the year.

“Soft p-c pricing certainly contributed to the disappointing performance, but the primary reason appears to be an unusually weak U.S. economy, which showed its worst quarterly performance in three years,” said Kevin Stipe, president of Reagan Consulting, a management consulting and merger-and-acquisition advisory firm for the insurance distribution system. “It’s encouraging, however, that brokers participating in Reagan Consulting’s Organic Growth and Profitability (OGP) Survey are projecting faster growth in 2017 than last year.”

Profitability, defined as agent-broker earnings before interest, taxes, depreciation and amortization (EBITDA), has continued to recede, with EBITDA margins hitting 27.6% in the first quarter. First-quarter EBITDA margins for OGP survey participants peaked in 2014 at 29.9% and have been sliding each year since, according to Reagan Consulting. Reagan notes that EBITDA margins tend to be highest in the first quarter, due to the cash-basis reporting of contingent income, and then slide throughout the year.

“That is the lowest first-quarter EBITDA margin we have seen among OGP brokers since 2012. Although most brokers forecast their full-year EBITDA margins will again hit the 20% level achieved in 2016, only one-fifth of survey participants believe their profit margins will improve in 2017,” Stipe said. “With the slow start to 2017, matching last year’s performance may prove to be difficult.” 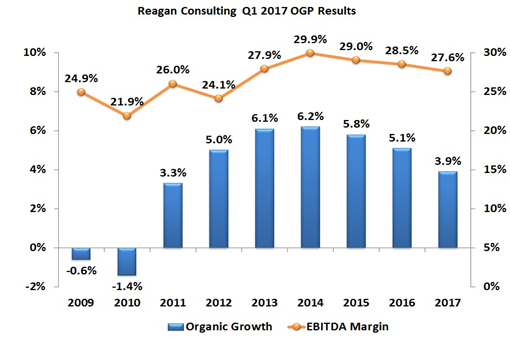 Reagan Consulting sees a widening gap between broker performance and valuations as concerning for investors, Stipe said. “The publicly traded brokers’ average organic growth in the first quarter was 3.8%, yet they traded at 12.7 times EBITDA as of March 31. That is extremely high compared with the historical multiple of 9 to 11 times EBITDA.”

Stipe noted that the only time in the past 20 years that publicly traded broker valuations reached an EBITDA multiple of 12.7 or higher was during the hard market following the 9/11 terrorist attacks in 2001, a time when organic growth rates also spiked upward.

“The public broker valuations serve as a useful proxy for the rest of the brokerage industry and affect agencies and brokerage firms of all sizes. Private equity-backed brokers typically determine their own value by applying a slight discount to the multiples of the public brokers,” Stipe explained.

Reagan Consulting has conducted its quarterly survey of agency growth and profitability since 2008, using confidential submissions from more than 150 midsize and large agencies and brokerage firms. Roughly half of the industry’s 100 largest firms regularly participate in the survey. The OGP study is the industry’s preeminent survey of midsize and large privately held brokers.

Each participating agency receives a customized, confidential report of its performance compared with the overall survey results, along with Reagan’s quarterly commentary of industry trends affecting agents and brokers. For information on participating in the OGP survey, contact Paula Williams at 404.233.5545 or pwilliams@ReaganConsulting.com.