ATLANTA (May 10, 2016) – Agent-broker organic revenue growth bounced to 5.1% for the first quarter of 2016, up from 4.6% for the full year 2015, as measured by the latest Reagan Consulting Organic Growth and Profitability (OGP) survey.

Profit margins were slightly lower at 28.5% in the first quarter of 2016, compared with 29.0% for the first quarter of 2015. That median profitability, measured by EBITDA (earnings before interest, taxes, depreciation and amortization), was still strong by historic standards. First-quarter profit margins are always inflated due to contingent income, but are expected to finish 2016 at approximately 20%, which would be another solid year.

“Given the powerful headwinds of softening commercial property-and-casualty pricing and continued weakness in the U.S. economy, the upward movement in growth is a positive,” commented Kevin Stipe, president of Reagan Consulting, a management consulting and merger-and-acquisition advisory firm for the insurance distribution system. 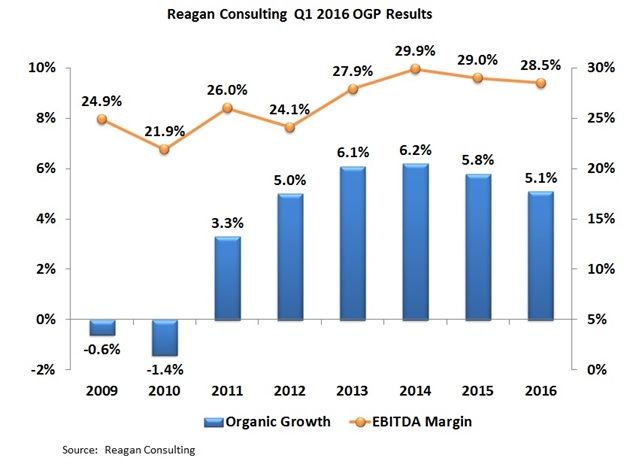 By line of business, Reagan Consulting’s study found strongest growth in the employee benefits sector (6.9% growth during Q1). A growth at that pace would yield the fastest yearly rate for employee benefits since 2011. Commercial property-casualty grew at a 5.1% rate while personal lines grew at 1.6%. Stipe cautioned that commercial rates and the sluggish growth rate are pressuring agencies: “If pricing continues to deteriorate and the economy doesn’t pick up, agency growth rates are likely to suffer later this year.”

Reagan Consulting has conducted its quarterly survey of agency growth and profitability since 2008, using confidential submissions from approximately 140 mid-size and large agencies and brokerage firms. Roughly half of the industry’s 100 largest firms participated in the most recent survey. Median revenue of the firms completing the survey is approximately $17 million, making it the industry’s preeminent survey of mid-size and large privately held brokers.

Reagan’s OGP study now measures sales velocity (new business written as a percentage of prior-year overall commissions and fees) — a figure that hit 12.1% during the first quarter of 2016. Sales velocity is the greatest differentiator of high-growth agencies, Stipe notes: Firms that achieved a 15% or higher sales velocity grew by 7.1%; those that achieved less than 10% grew only 2.2%.

Merger-and-acquisition activity among agents and brokers, while not measured by the OGP survey, continued at a “blistering pace,” commented Stipe. Reported North American deals topped 107 for the quarter, compared with the all-time record of 124 in the first quarter of 2015. “The outside world (represented by private equity) has fallen in love with the investment performance of insurance brokers,” explained Stipe, driving agency valuations to “levels never before seen.”

For further information and commentary, contact Kevin Stipe of Reagan Consulting at 404.869.2532 or by email to kevin@ReaganConsulting.com.

Each participating agency receives a customized, confidential report of its performance compared with the overall survey results, along with Reagan’s quarterly commentary of industry trends affecting agents and brokers. For information on participating in the OGP survey, contact Michelle Appelbaum at 404.233.5545 or by email to michelle@ReaganConsulting.com.