ATLANTA (February 9, 2016) – Agent-broker organic revenue growth slowed to 4.6 percent for 2015, as shown by the latest Reagan Consulting Organic Growth and Profitability (OGP) survey. Organic growth was 6.2 percent each year from 2012-‘14.

Profit margins declined to 20.1 percent, a year after reaching record profitability in 2014. That median profitability, measured by EBITDA (earnings before interest, taxes, depreciation and amortization), was 21 percent in 2014, according to the survey.

“The results show a downward tick. But they are still fairly solid from a historical perspective,” commented Kevin Stipe, president of Reagan Consulting, a management consulting and merger-and-acquisition advisory firm for the insurance distribution system. “In the past eight years of the OGP survey, the organic growth rate of 4.6 percent ranks fourth best, while the EBITDA margin of 20.1 percent ranks second best.” 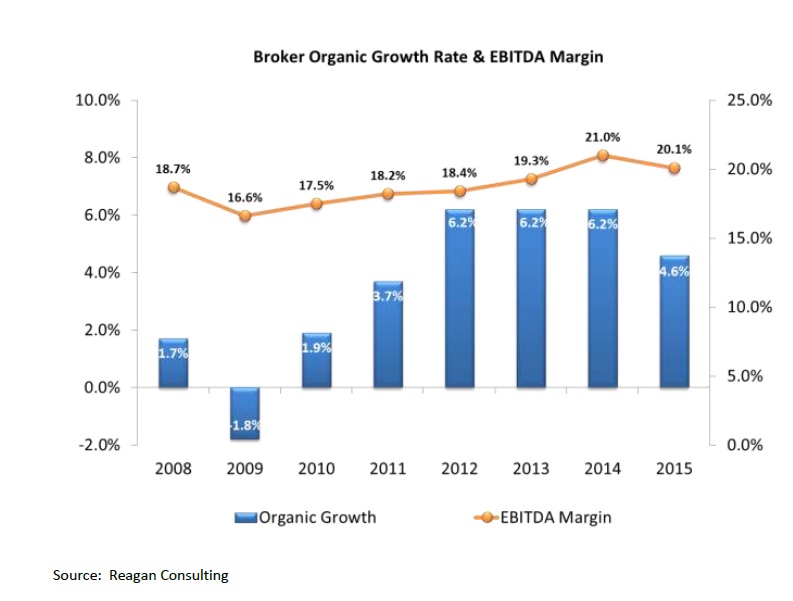 “The boom that drove oil prices to more than $100 per barrel in 2013 turned into an oil bust in 2015 with prices reaching the high-$30s range,” commented Stipe. “Insurance brokers in oil-producing states once benefited from economic activity stimulated by high oil prices, and outpaced peers in other states. That has flipped: oil-state firms grew at only a 2.5 percent rate in 2015, 2.3 percentage points slower than other OGP firms.”

Reagan Consulting has conducted its quarterly survey of agency growth and profitability since 2008, using confidential submissions from approximately 140 mid-size and large agencies and brokerage firms. Roughly half of the industry’s 100 largest firms participated in the most recent survey. Median revenue of the firms completing the survey is approximately $17 million, making it the industry’s preeminent survey of mid-size and large privately held brokers.

Merger and acquisition activity among agents and brokers, while not measured by the OGP survey, was at an all-time high in 2015, noted Reagan Consulting. Reported North American deals topped 400 for the first time ever, and “valuations hit record levels for firms of all sizes,” commented Stipe.

For further information and commentary, contact Kevin Stipe of Reagan Consulting at (404) 869-2532 or by email to kevin@ReaganConsulting.com.

Each participating agency receives a customized, confidential report of its performance compared with the overall survey results, along with Reagan’s quarterly commentary of industry trends affecting agents and brokers. For information on participating in the OGP survey, contact Michelle Appelbaum at (404) 233-5545 or by email to michelle@ReaganConsulting.com.