ATLANTA (February 26, 2019) — As the calendar flips to 2019, agents and brokers in the independent insurance distribution channel are in high spirits. That’s because they just closed the books on their best year since 2014 and foresee record growth in 2019, according to Reagan Consulting’s Organic Growth and Profitability (OGP) survey for the fourth quarter (Q4) of 2018.

The survey shows “a convergence of impressive upward trends in each major line of business,” says Kevin Stipe, president of the firm.

OGP participants generated organic growth of 6.1% in 2018, surpassing their projected organic growth rate of 5% for the year. Growth was driven by continued increases in U.S. GDP and commercial pricing. For 2019, OGP participants are forecasting growth of 7%, which would be the highest growth rate since Reagan began its quarterly OGP survey in 2008. 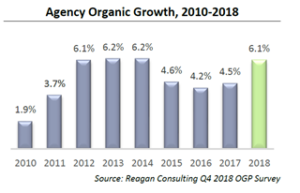 Buyer optimism of agent and broker performance and seller concerns of scale and internal perpetuation planning have fueled what Stipe characterizes as a “frenzy” of mergers and acquisitions (M&A). He says many brokers and agents wondered whether M&A activity could exceed its record-setting pace of 2017 but, “incredibly, deal activity increased by another 7%, reaching 597 announced transactions” in 2018. Two drivers were all-time high valuations and a heavy influx of acquisition capital to private equity-backed brokers.

Agency owners believe that size and scale ensure survival as competition intensifies in the industry, Stipe observes. Small agencies whose owners are facing retirement without a succession plan are also contributing to the increase in transaction count. “Without a viable path to continued independence,” these agencies turn to an M&A transaction, Stipe says.

Employee group benefits was the channel’s leading performer of 2018, growing organically at a rate of 7.3%. This growth rate was more than 2 percentage points higher than last year’s and represents the highest annual growth rate since the OGP survey began in 2008.

Commercial lines’ growth rate also increased by more than 2 percentage points from 2017, as the median firm grew its commercial property & casualty business by 6.5% in 2018.

Personal lines business accelerated its growth rate for the third consecutive year to 3.9%, “which…is the fastest growth rate recorded for personal lines in the 11-year history of the OGP survey,” says Stipe.

In terms of profitability, the channel has remained stable over the last four years. In 2018, earnings before interest, taxes, depreciation and amortization (EBITDA) margin dropped slightly to 20.2%, and contingent revenue, as a percentage of revenue, fell one percentage point. Despite the small drop in profitability, operating margin (which excludes contingent and bonus income) rose slightly in 2018, “implying that brokers and agents were successful in controlling their expenses,” says Stipe. 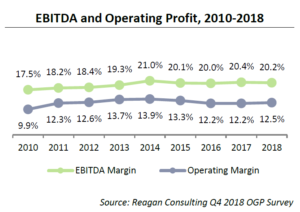 Reagan Consulting has conducted its quarterly survey of agency growth and profitability since 2008, using confidential submissions from nearly 200 midsize and large agencies and brokerage firms. Approximately half of the industry’s 100 largest firms participated in this quarter’s survey. The OGP survey is the industry’s preeminent survey of midsize and large privately held brokers.