ATLANTA (February 13, 2017) — Organic revenue growth among agencies and brokerage firms fell in 2016 to 4.2% — its lowest annual rate since 2011. The year ended on a positive note, however, as fourth-quarter organic growth outpaced the 3.6% recorded in the third quarter.

“The fourth-quarter uptick was among several factors that are making brokers optimistic that better days are ahead,” said Kevin Stipe, president of Reagan Consulting, a management consulting and merger-and-acquisition advisory firm for the insurance distribution system. “In fact, brokers participating in Reagan Consulting’s Organic Growth and Profitability (OGP) Survey are projecting 6.0% organic growth in 2017.”

Broker optimism for 2017 seems to be driven, in part, by a new administration widely perceived to be business-friendly and intent on driving faster economic growth.  With property and casualty prices expected to remain soft for at least another year, faster economic growth will likely be necessary for brokers to achieve their expectations, Stipe said.

“Since 2013, broker organic growth has been levitating above weak GDP growth and declining p-c pricing,” Stipe commented. “Organic revenue growth can’t continue to defy gravity, so GDP will need to increase if brokers are going to achieve their growth goals.”

A look at trends by line of business shows an interesting divergence – with group benefits once again outpacing commercial p-c.  Group benefits growth accelerated to 6.8%, versus 5.5% in 2015.  On the other hand, commercial p-c declined again, falling to 3.3% from 5.3% the year before.

Agency profit margins, as measured by earnings before interest, taxes, depreciation and amortization (EBITDA) experienced virtually no change in 2016, at 20.0%. Operating margins, which have continued a three-year decline, fell to 12.2% in 2016. Unlike EBITDA, operating margins do not include contingent income, which represents a growing percentage of revenue for many agencies and brokerage firms. Stipe cautioned that profit margins could shrink if contingent income returns to historical levels in the 7.0%-7.5% range. In 2016, contingent income reported by participants in the OGP was 8.5% of revenue. 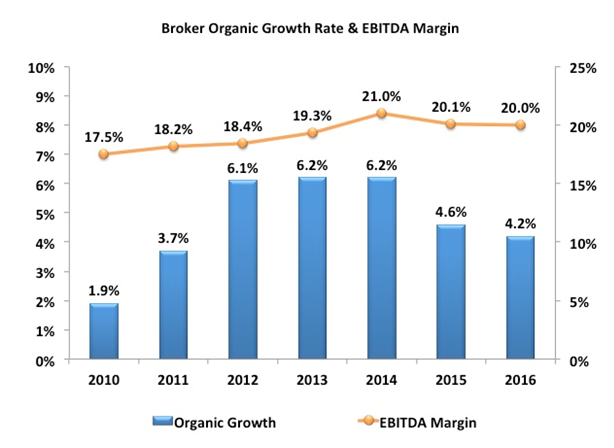 Reagan Consulting has conducted its quarterly survey of agency growth and profitability since 2008, using confidential submissions from over 150 mid-size and large agencies and brokerage firms. Roughly half of the industry’s 100 largest firms regularly participate in the survey. The OGP study is the industry’s preeminent survey of mid-size and large privately held brokers.