ATLANTA (November 7, 2018) — Independent insurance agents and brokers can celebrate a four-year growth trend. So reports Reagan Consulting upon releasing its third-quarter Organic Growth and Profitability (OGP) study. The industry organic growth rate in Q3 was 6.1% — tied for the highest growth rate in the last 15 quarters.   “This strong Q3 performance is another confidence builder for the industry,” says Harrison Brooks, Vice President of the firm. 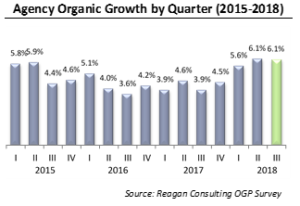 All lines of business contributed to the strongest nine-month growth performance since September 2013. Commercial lines led industry growth at 6.8%, surpassing group benefits growth for the first time since 2014. Group benefits continued strong growth at 6.3% and personal lines – at 3.8% growth – posted its highest Q3 growth rate since Reagan began the OGP survey in 2008.

Brokers expect strong growth throughout 2018, estimating a full-year growth rate of 6.0% versus just 4.5% in 2017. “If history is any indication of future performance,” says Brooks, “strong GDP tailwinds are likely to continue to drive strong organic growth for agents and brokers.”

The strong growth performance in the last quarter has been accompanied by significant investment activity in the insurance distribution space. “Sustained organic growth and healthy industry fundamentals,” notes Brooks, “have led to some big bets being placed on both the acquisition and insuretech fronts.”

Despite the bullish outlook for the industry evidenced by these investments and the strong growth performance, Reagan leadership did express one note of caution around agency profitability. “It will be important to monitor EBITDA

[earnings before interest, taxes, depreciation and amortization] margins, especially in larger agencies,” says Brooks. EBITDA margins declined slightly in Q3 2018 from last year, and it appears that contingent income, which dropped from 8.6% of revenue in 2017 to 8.0% of revenue in 2018, was the primary driver. 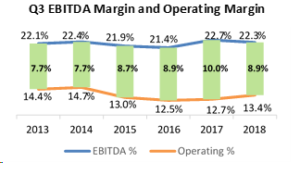 Reagan Consulting has conducted its quarterly survey of agency growth and profitability since 2008, using confidential submissions from nearly 200 midsize and large agencies and brokerage firms. Over half of the industry’s 100 largest firms participated in this quarter’s survey. The OGP study is the industry’s preeminent survey of midsize and large privately held brokers.