As revealed by the firm’s quarterly Organic Growth and Profitability (OGP) survey, the industry’s organic growth for the first quarter (Q1) of 2018 was 5.6% and has risen to 6.1% through Q2. It’s notable that the industry has not seen two consecutive quarters of organic growth at or above 6.0% since 2014. Organic growth in 2017 was 4.5%. 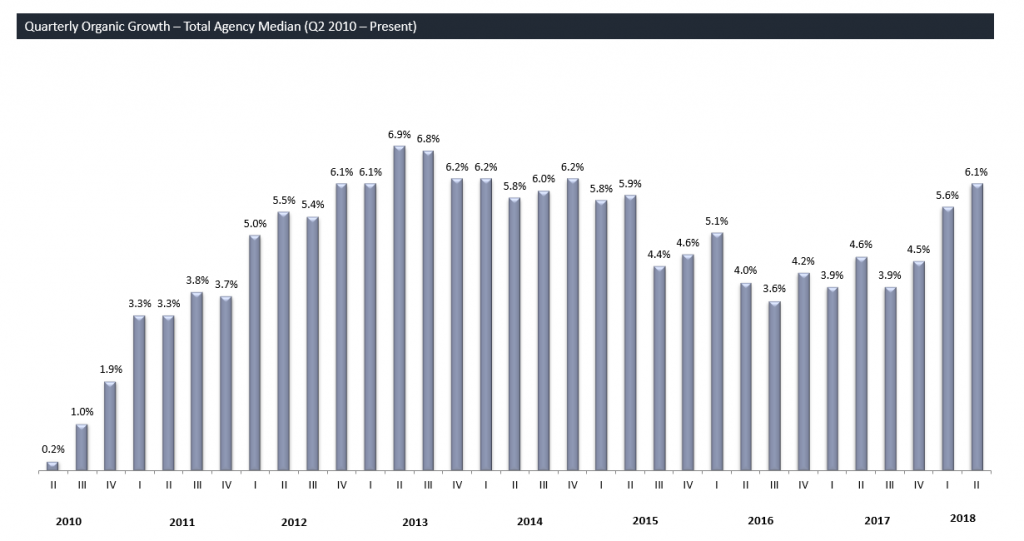 Sales velocity is a proprietary Reagan metric to benchmark an agency’s new business results against other firms. It is expressed as a percentage and calculated by dividing a firm’s new business written in the current year by the prior year’s commissions and fees. Stipe explains that a firm consistently posting sales velocity figures in the top 25% of the industry (18.5% or higher in Q2 2018) “likely will generate above-industry growth, assuming normal levels of client retention.”

Independent agencies and brokers also project a solid increase in rule of 20 scores for 2018, demonstrating “their positive outlook for organic growth,” says Stipe. At 17.8, the rule of 20 score for all reporting firms is up from last year’s score of 14.3.

The rule of 20 is Reagan Consulting’s metric to benchmark an agency’s shareholder returns. It is calculated by adding half of an agency’s earnings before interest, taxes, depreciation and amortization (EBITDA) margin to its organic revenue growth rate. An outcome of 20 or higher means a firm likely is generating a shareholder return of about 15% to 17%, which is a typical return under normal market conditions.

Despite the increases in organic growth, sales velocity and rule of 20 scores, firms have had to reduce their initial prognostications for 2018 by a percentage point to 6.0%, largely because their EBITDA margin dropped by almost 2 points, from 24.6% in Q2 2017 to 22.7% in Q2 2018. Furthermore, margins in all three lines of business have declined slightly versus last year. Stipe explains that “contingent income is relatively flat year over year, pushing margins down.” He adds that year-to-date profitability numbers “are inflated by cash-basis contingent income recorded through Q2, so margins will come down throughout the year.”

Reagan Consulting has conducted its quarterly survey of agency growth and profitability since 2008, using confidential submissions from more than 150 midsize and large agencies and brokerage firms. Nearly half of the industry’s 100 largest firms regularly participate in the survey. The OGP study is the industry’s preeminent survey of midsize and large privately held brokers.